Oregon grape and barberry are very safe, though they can aggravate an already overstimulated or inflamed digestive tract.

​Oregon grape and barberry are moderately-to-strongly potent, depending on the action.

Part Used: The inner bark of the fresh root is preferred, though the whole root and root bark of fresh and dried roots can be acceptable.

Major Actions:
In one human clinical trial of purified berberine in patients with cholera, no antisecretory effect was seen at 100 mg qid doses (Khin-Maung-U, et al. 1985).

Major Constituents:
Adverse Effects:
Contraindications:
Drug Interactions: There are no known, published studies on whole Oregon grape or barberry roots or extracts causing any drug interactions. However, human clinical trials on pure berberine have consistently reported effects consistent with inhibition of intestinal CYP3A4, leading to increased absorption of many drugs, and thus the potential for a dose-sparing effect. See details on this page.

Purified berberine can also displace drugs that are extensively protein bound, also augmenting their potency. Such effects have never been reported with whole Oregon grape or barberry roots or extracts.

Pure berberine was also found to interfere with tetracycline when taken simultaneously in patients with cholera or diarrhea due to enterotoxic E. coli (Rabbani, et al. 1987). This may be because berberine binds to an interferes with absorption of tetracycline. Simply separating the doses of these drugs in time by a couple of hours will circumvent this problem. No published evidence has been presented on whether whole Oregon grape or barberry roots or extracts would cause a similar problem, but for safety's sake it is recommend their doses are also separated by at least two hours.
Back to Top

Decoction: 2–3 g (1 heaping tsp) of root simmered, covered, in 250 ml of water for 15–30 min, the result of which makes one cup (not 8 oz, but one dose). The amount of water used can be adjusted to patient taste in subsequent cups.
Dose:
Acute adult: 1 cup up to q2h for 2–3 days
Chronic, adult: 1 cup tid
Child: as adult but adjusted for body size

Note: Because of intermediate forms between strict Berberis and Mahonia, and results of modern genetic studies, the species name Mahonia aquifolium is not used in this monograph. However, Mahonia aquifolium is used in Herbs of Commerce and thus is the legally correct Latin name of this plant in the United States.

Berberis and Mahonia species are very broadly interchangeable, even between continents. For example, the famous herbalist Michael Moore considered all North American species interchangeable (Moore 2003). There is little research on their comparative potency though. It is recommended to use the most bioregional or local species possible to reduce unnecessary shipping and the pollution that inevitably comes with it.
Back to Top

Pharmacokinetics: Berberine is very poorly orally absorbed. In one human study, only minute amounts were recovered in the urine after oral administration (Miyazaki, et al. 1978). This does not preclude that active metabolites formed from berberine do circulate at higher levels. Serum levels of 0.11 mg/L of berberine are necessary for antiarrhythmic effects (Zeng and Zeng 1999).

Additional Actions:
* Refers to pure berberine.
Flavonoids in leaves inhibit drug-resistance pumps against berberine in vitro (Stermitz, et al. 2001 and 2000a and b).

Additional Indications: * Refers to pure berberine.
Back to Top

Specifically mentioned for syphilis, buboes, and suppurating glands. This bears a striking resemblance to the famous cancer formula known as the Hoxsey formula. Despite the stories Harry Hoxsey told about the origins of this formula (supposedly observing horses grazing on certain plants, which is absurd both because severe things in this formula are toxic to horses and they don't eat them, and also because they don't even grow in the same place for horses to graze), the reality is he based it on this and other similar formulas promulgated by the Eclectic physicians.

For "very torpid digestion and poor assimilation, with biliousness, as found frequently in cases of dropsy."

Dose: 1 tsp tid
Back to Top

Action and Therapy.—This agent is alterative, tonic, and probably corrective to syphilitic constitutions, but without any proved specific action upon treponema. It stimulates secretion and excretion, improves digestion and assimilation; it activates the lymphatic system and ductless glands; and augments the renal secretion. It is a corrector and eliminator of depraved body fluids and assists thereby in good blood-making. In this way most likely its good effects are produced in such grave constitutional disorders as syphilis. Certainly the ravages of this disease are lessened under these circumstances and aggravated by general ill-conditions. If then syphilitic dyscrasia is benefited by this drug, and clinical results seem to show that it is, it is probably due to its general alterative effects in maintaining good elimination and good metabolic action of the organs vital to nutrition.

Like hydrastis, Berberis aquifolium is an excellent peptic bitter and tonic to the gastric function, and is, therefore, a drug of much value in atonic dyspepsia, with hepatic torpor. Upon the mucosa its effects are like those of hydrastis controlling catarrhal outpouring and erosion of tissue. For this purpose it is useful in stomatitis and gastric and intestinal catarrh. Remotely it sometimes controls leucorrhoea. If these are associated with syphilis, it helps the latter to the extent that it controls these disorders.
​
Berberis aquifolium has won its reputation chiefly as a remedy for the syphilitic taint. The more chronic the conditions or results of the disease, the more it has been praised. Some claim that if given early it will abort the tertiary stage, but this of course depends in most cases upon the resisting powers of the body and the care the patient takes of himself. Apparently berberis fortifies the resisting powers by its alterative and reparative action. The bone, mucosa, and cutaneous disorders following in the wake of syphilis seem to clear up under its persistent use, when given in appreciable doses. Whether it has any effect on the nervous damage from this taint is not yet apparent. It does, however, relieve the night pains and the shin pain of syphilitic periostitis. Syphilitic phagedena disappears under its use, and sometimes the anemia of syphilis yields to its nutritional improvement. It should be given freely in syphilitic leucoplakia of the tongue, mouth, and throat, where the mucosa is tumid and secreting excessively, and when emaciation and weakness with yellowish parchmentlike skin are evident. At all events, though probably not a direct antisyphilitic, its general effect upon waste and nutrition is so beneficial that it should invariably be associated with other treatment in chronic syphilitic diathesis.

Other dyscrasiae seem to be influenced by this drug. It aids to some degree to mitigate the miseries of the consumptive, and in chronic skin diseases its internal use has hastened the effects from external medication. Eczema, psoriasis (temporarily at least), and herpetic eruptions have disappeared under its persistent use. The specific medicine should be given in doses of from 10 to 20 drops well diluted, every 3 or 4 hours.

The bark of the root and the berries of Berberis vulgaris, Linne (Nat. Ord. Berberidaceae). Europe, Asia, and the United States.

Principal Constituents.—Berberine (see Hydrastis) is the active alkaloid; others are oxyacanthine and berbamine. The berries contain malic acid.

Action and Therapy.--Barberry may be used for purposes for which berberine medication is needed. It acts much like hydrastis and could be employed for many of the uses of that scarce and high-priced drug so far as the berberine effects are required. The fluid preparations are asserted to act more kindly and more efficiently than berberine itself. It was very early used in domestic medicine for sore eyes, and later by practitioners for chronic catarrhal ophthalmias. The decoction is employed for this purpose, and is equally efficient in aphthous sore mouth. It is decidedly tonic and if pushed, purgative. Used short of its cathartic action it is of value in non-obstructive jaundice and in gastric and intestinal dyspepsia. In renal catarrh, occasioned by the presence of calculi, small doses may be given when there is burning and soreness and excess of mucus in the urinary tract.
Back to Top

Botanical Description: This shrubby genus can be low growing (B. nervosa) or reach up to 6 ft high (B. aquifolium and B. vulgaris) (Abrams 1934). The compound leaves of the Oregon grape have no spine at the base; they are evergreen and waxy, with sharp tips resembling the leaves of Ilex (holly), and are dark green. They are alternate and have 5–9 leaflets on each leaf (B. nervosa) or 9–15 leaflets on each leaf (B. aquifolium). The leaves of barberry are simple and alternate and are dark maroon in color. The flowers of the Oregon grape grow in terminal racemes, are small and yellow in color with tart blue-purple berries. The fruits of barberry are bright red and grow singly under the leaves along each branch. The bark is brown on the surface and yellow beneath for each of these plants. The barberry also has spines along its primary stems. The root is from 1–6 cm diameter at the base of the stem.

Native range: Oregon Grape Root is native to the western United States. It grows from Colorado to the Pacific Ocean, and is especially abundant in Washington, Oregon and northern California. 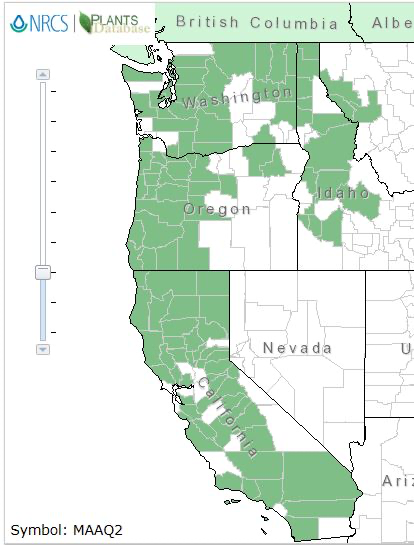 Predominant native range of Berberis aquifolium
Back to Top

Cultivation: B. aquifolium is readily cultivated from seed or by transplanting. It can tolerate a wide range of water regimens and sun exposure (from full shade to full sun). It is widely planted for horticultural purposes throughout its native range.

Wildcrafting: Collection of the roots is still extremely common from wild stocks.

Ecological Status: Currently this shrub is extremely widespread and there is no reason to be concerned about overharvesting. The inclusion of this herb on the United Plants Savers "to watch" list is apparently based on it having a "limited range." This seems absurd as its range is enormous, and that is very readily and widely cultivated (albeit more for horticulture than medicine, growing for medicinal use could be readily ramped up if there really was any threat to wild stocks).
Back to Top

Gulliver WP, Donsky HJ (2005) "A report on three recent clinical trials using Mahonia aquifolium 10% topical cream and a review of the worldwide clinical experience with Mahonia aquifolium for the treatment of plaque psoriasis" Am J Ther 12:398–406.

Zeng XJ, Zeng XH (1999) "Relationship between the clinical effects of berberine on severe congestive heart failure and its concentration in plasma studied by HPLC" Biomed Chromatogr 13:442–4.