Threats to Myrrh, a Magical Herb

Myrrh (Commiphora myrrha, formerly called C. molmol) resin is a major medicinal product. It is native to arid regions in the Horn of Africa as well as the southern Arabian peninsula. Most myrrh enters commerce from Somalia and Ethiopia, and data on the quantities harvested and sold are hard to come by. The problem with the massive myrrh harvest in Somalia is the decades-long civil war there, which has pushed the large majority of the population into severe poverty. Desperation for income and survival unfortunately drives people to unsustainably harvest myrrh (Small 2017). The situation with myrrh largely mirrors that of Boswellia spp (frankincense), about which there is far more information and clear evidence it is in a desperate and severe ecological decline (see the separate article on this plant). Overharvesting of myrrh and the resulting deaths of many of the wild trees contributes to increasing desertification in Somalia and Ethiopia (Small 2017).

Other pressures on the native habitat of myrrh contributing to its decline include harvest for firewood (as well as harvest of associated trees for firewood, reducing natural protection), clearance to convert land to farming, damaging grazing by domestic animals, and other damaging harvesting practices of plants in the arid woodlands where it grows (Fenner 1982).

As is also the case with frankincense, myrrh does represent an important source of income in some areas. Unfortunately, it is clear that most of the profit does not flow to local people but instead is siphoned off by middle men (and they are mostly men) and others in a convoluted supply chain (Gizaw, et al. 2014). Much harvest clearly flows through illegal channels (Gizaw, et al. 2014). Thus, as is almost always the case with threatened medicinal materials, if the source of a myrrh product is not specifically stated to be sustainable and to follow fair trade practice and is not traceable, it is likely part of the problem and not the solution.

The most important and immediate thing most people can do is to stop buying myrrh from companies that do not reveal their sources, or that are clearly buying from unsustainable or conflict-tainted sources. Given the near total lack of sustainable myrrh sources, it is hard to imagine finding a source that doesn't fit this description.

Second, you can get politically involved to try to make the situation better. If you have connections where myrrh grows, why not work with a local group to try create a sustainable and fair market?

Third, you can use or recommend substitutes. Populus spp (poplar), Pinus spp (pine), Abies spp (fir), Tsuga spp (hemlock), Pseudotsuga menziesii (Douglas fir), and Picea spp (spruce) resins are all superabundant trees that provide resins with much similarity to frankincense. These products are very sustainable (at least in the Northern Hemisphere).

One confirmed source of cultivated myrrh and frankincense is the Balm of Gilead Farm in Israel.

It also appears that Böswellness works directly with frankincense and myrrh harvesters in Somaliland, following sustainable and fair-trade principles.

Apothecary's Garden also states it has fair-trade, sustainable myrrh, though this is difficult to verify.

Dr. Yarnell has connection with or financial interest in any of these companies. They are linked here solely in the interest of promoting and sustaining frankincense and the people who live with these amazing trees. 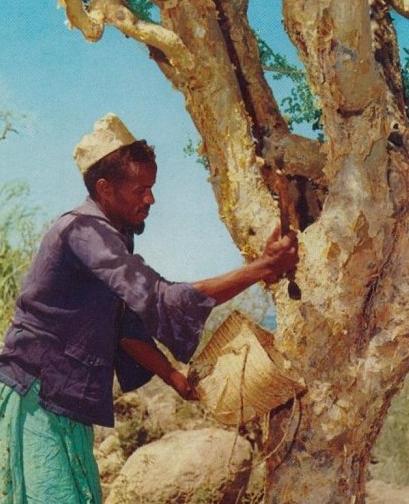 A Somali man tapping a myrrh tree in the 1970s. CC2.0 license from the Somalia Ministry of Information and National Guidance