Part Used: the fresh or dried leaf, flower, and fruit are used (if only leaf is available, that is acceptable). The material should have the highly distinctive and very potent odor of creosote bush. The leaves should be bright green and the flowers yellow in good quality material.

Major Actions:
In vitro, nordihydroguaiaretic acid (NDGA) reversed resistance to aminoglycosides in Staphylococcus aureus, apparently due to the ability of this compound to sufficiently damage the bacterial cell membrane to allow penetration of the antibiotics into the cells (Cunnigham-Oakes, et al. 2015). Other compounds in the plant also have antibacterial activity against S. aureus and enhance antibiotic activity against this microbe, including by inhibition of ATP-binding cassette proteins on the bacterial cell membrane (Favela-Hernández, et al. 2015).

Major Organ System Affinities
Major Indications:
In a double-blind trial, 113 patients with actinic keratosis were randomized to be treated either with topical NDGA or a vehicle placebo (Olsen, et al. 1991). Subjects applied the treatment twice daily for 14--28 days. There was a significant reduction in the size of actinic keratoses with NDGA compared to placebo. Erythema and flaking of the lesions occurred in 62\% of those treated with NDGA.

An open trial found the topical NDGA temporary moderated psoriasis lesions, but they reverted to their prior severity when treatment was stopped (Szmurło 1990).

Major Constituents:
Up to 10% of the dry weight of the leaves and stems of creosote bush is made up of NDGA. This is one of the only instances in the natural world where one can see a single constituent present in such enormous concentrations.

Adverse Effects: nausea can occur when taking the herb internally; taking it with food helps avoid this.

A handful of cases of idiosyncratic liver damage associated with creosote bush have been published. In one case, repeat damage occurred upon re-challenge in the same patient (Kauma, et al. 2004). One case series has been published on the safe use of creosote bush tincture for longer periods of time (Heron and Yarnell 2001).

Intraperitoneal NDGA had an LD50 of 75 mg/kg in mice, with time- and dose-dependent increase in serum liver enzymes associated (Lambert, et al. 2002). The relevance of this to human oral use is unknown. An aqueous infusion of creosote bush given to male Swiss albino mice for 16 days at 760 mg/kg body weight caused no discernible toxicity (Bigliani, et al. 2010).

Contraindications:
Drug Interactions: ​None have been documented, but use with hepatotoxic drugs is not recommended.
Back to Top

Decoction: This is not for the faint of heart, given the intensely bad taste. Mix 1–2 g (1 scant tsp) of aerial parts simmered, covered, in 250 ml of water for 15 min, the result of which makes one cup (not 8 oz, but one dose). The amount of water used can be adjusted to patient taste in subsequent cups.
Dose:
Acute adult: not recommended
Chronic, adult: 1 cup bid-tid
Child: as adult but adjusted for body size

Capsules: Crude powder in capsules: 250–500 mg tid. Not recommended for long term use. By masking the taste it becomes possible to take more than is safe for some sensitive people. Clinical trials in cancer patients have used up to 2 g per day safely (Friedlander, et al. 2012).

Creosote bush in castor oil: macerate dried herb in castor oil, covered, on low heat for 48–72 h. Press out the the liquid and apply topically at least once a day, with or without a hot pack. Extremely messy.

Larrea is named for the botanist and Bishop Juan Antonio Hernández Pérez de Larrea (17311803) from Valladolid, Spain. The species name tridentata is highly misleading, as almost all the leaves are actually bidentate.

This plant does not grow in the bioregion known as the chaparral, so calling it chaparral is not reasonable. Nevertheless it is considered the standard common name by the American Herbal Products Association and is the legal name in commerce in the US. However, the name creosote bush will be used here given the serious inaccuracy of the name "chaparral."

There are several other medicinal species of Larrea found in South America, notably L. divaricata (jarilla, jarillo) and L. nitida (jarrilla). They are largely interchangeable. L. cuneata and L. tridentata demonstrated synergistic activity against candida in vitro in one study (Espino, et al. 2019).

An aqueous extract of creosote bush (which was shown to contain only very low quantities of NDGA) showed antineoplastic activity at a level similar to NDGA alone and that the extract and NDGA worked by some different mechanisms, suggesting there are water-soluble constituents that are active in creosote bush (Anesini, et al. 2001).

Hamsters fed a high carbohydrate diet were completely protected from developing gallstones by concomitant administration of ethanolic extract of dried creosote bush (Arteaga, et al. 2005). An aqueous extract was not effective. Both NDGA and the ethanol extract were shown to have cholestatic effects in hamster livers.

Additional Indications, Topical: Additional Indications, Internal:
​The use of creosote bush for cancer is controversial, with the one published case series showing minimal benefits (Smart, et al. 1970) despite an earlier positive case study (Smart, et al. 1969). A more modern open trial found that NDGA 2 g per day did have at least some evidence of slowing prostate cancer in patients with non-metastatic disease with minimal toxicity (Friedlander, et al. 2012).

Terameprocol is a semi-synthetic tetra-methylated derivative of NDGA (meso-tetra-O-methyl-NDGA) that is currently being studied to treat various forms of cancer, including successful phase I trials in patients with advanced leukemias and glioma (Tibes, et al. 2015; Grossman, et al. 2012). Intralesional injection of 20 mg per cm of head and neck tumor led to necrosis of the cancer in 5 of 6 patients studied without surrounding tissue damage (Dunphy, et al. 2004). Repeated, direct application of up to 90 mg of terameprocol to the cervix had no discernable adverse effects in one human clinical trial (Khanna, et al. 2007). It may have benefits for treating cervical dysplasia or non-invasive cervical cancer. Terameprocol has been shown to have numerous actions including competing with the transcription factor Sp1 for specific Sp1 DNA binding domains within gene promoter regions during DNA synthesis. This interferes with transcription of the Sp1-dependant genes including cyclin-dependant kinase, survivin, and vascular endothelial growth factor, which are overexpressed in a variety of cancers. This ultimately interferes with tumor angiogenesis and proliferation and induces apoptosis.

Botanical Description: Creosote bush is an aromatic, evergreen shrub (somewhat drought deciduous) up to 3.5 m tall. The stems have dark glandular bands at the nodes. There are relatively few, scattered, leathery leaves except during periods of intense rains. The leaves are opposite, with pairs of leaflets united at the base (thus truly this is bidentate, not tridentate as the Latin suggests), 1 cm long, and strongly scented. It produces yellow flowers, especially after a wet rainy season, followed by globose capsules that split into 5 nutlets and are covered in white hairs. The flowers are solitary, pedicel-borne, with five yellow-green sepals and a corolla of five yellow petals 7–11 mm long, with 10 stamens, 1 pistil, and a superior ovary. It is widespread and common on dry plains and mesas below 5,000 ft (1676 m).

Native range: Creosote bush is the dominant shrub of the Sonoran Desert, and is considered the type species for this desert. It has not spread outside this range though it is found somewhat in the Mohave and Chihuahua deserts, where they intergrade with the Sonoran. Some disjunct populations are also found in the southernmost Great Basin desert as well. 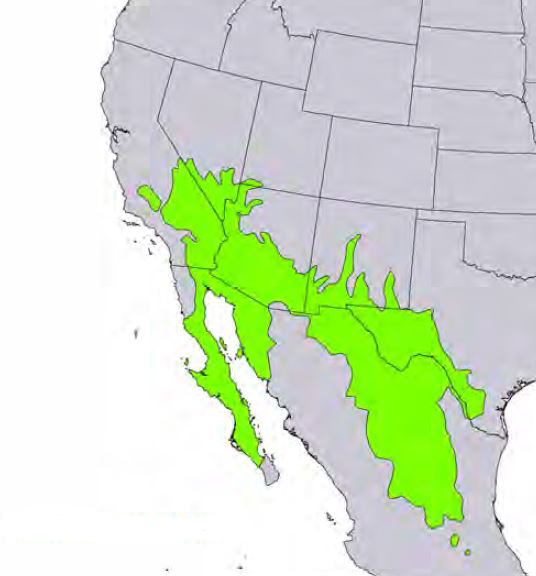 Native range of Larrea tridentata (US Department of Agriculture, 1970)
Back to Top

Cultivation: Cultivation is not yet practiced and is unnecessary as this plant is incredibly widespread.

Wildcrafting: Since renewable parts of the plant are taken, it is not believed to be a huge toll on the plants when it is harvested. Nevertheless, only a small portion of any one shrub's foliage should be taken at any one time. There really are no plants that look like this, and certainly none that smell like it, making accidental harvesting of the wrong species highly unlikely.

Ecological Status: This plant is quite stable, though there is concern that drawing down the water table by cities in the Sonoran Desert is impacting the health of the chaparral. Additionally, human development is taking away more and more of its habitat. Nevertheless, it grows in places that are simply not suitable for almost any purpose (as far as humans are concerned), so it is unlikely it would ever be eradicated.

Rea AM (1997) At the Desert’s Green Edge: An Ethnobotany of the Gila River Pima (Tucson: University of Arizona Press).