Usnea is a moderately strong antimicrobial.

​Used in reasonable doses, usnea has no significantly adverse effects. Isolated usnic acid in high doses is hepatotoxic.
Back to Top

Part Used: the fresh or dried thallus is used. It should retain its grayish-green coloration if dried.

Nausea or vomiting may occur with crude extracts at very high doses, though even this is poorly documented.

Contraindications: None known, except that isolated usnic acid should not be used. Use in patients with active autoimmune disease or taking immunosuppressive drugs because of this, or because of organ transplantation, is of unknown safety. The posited immunostimulant effects of this herb have not been documented and are only theoretical at this point.

Drug Interactions: ​It would be imprudent to combine large doses with hepatotoxic drugs, though this is highly speculative.
Back to Top

Decoction: 2–3 g (1 heaping tsp) of root simmered, covered, in 250 ml of water for 15–30 min, the result of which makes one cup (not 8 oz, but one dose). The amount of water used can be adjusted to patient taste in subsequent cups.
Dose:
Acute adult:
Chronic, adult: 1 cup tid
Child: as adult but adjusted for body size

Dakhótiyapi (Dakota, Siouan): chan wiziye ("on the north side of the tree")

Esperanto Common Names: usneo (U. barbata), hirta usneo (U. hirta)
Back to Top

There is sufficient historical information to consider these species of Usnea likely to be interchangeable as medicine: U. cornuata (inflated beard lichen), U. florida (eyed beard lichen), U. hirta (and U. barbata which is by many sources considered a synonym for U. hirta, shaggy or bristly beard lichen), U. longissima, and U. wirthii (blood-spattered beard).

Additional Actions:
Additional Indications:
Dioscorides does not clearly and explicitly deal with usnea, though some argue that his section 1-20 is about either Usnea florida or Alectoria arabium (which smells sweet). Others believe he was talking about Humulus lupulus (hops), though this seems unlikely as he would surely have mentioned the pronounced bitter taste of this herb. It is also possible he is described some type of mistletoe. Here is one translation of this passage: "1-20. BRUON: Bryum is sometimes called sphlanchnon. It is found on trees such as cedars, white poplars or oaks: the best grows on cedar, next is that which grows on white poplar. That which smells sweetest and is white is the best, but that which is black is the worst. Bryum is astringent. Used either hot or cold it is good in decoctions made for all those disorders requiring bathing around the vulva. It is mixed with ointments made for suppositories, with other ointments for the astringent quality in it, for the preparation of perfumes, and is put into medicines called acopi [to remove fatigue]" (Dioscorides 2000).

Usnea spp have been reported for a wide range of uses by native people in North America and elsewhere, though some of these reports may be flawed by misunderstanding of language or culture, or other problems. The Pomo (who are a diverse group of bands from what is now northern California with closely related languages) reported used U. californica as absorbent padding in diapers (Gifford 1967). U. lacunosa was similarly used as bedding by people living in what is now Mendocino County (Chestnut 1902). The X̱aayd (Haida) reportedly used U. longissima to strain hot resins to remove various impurities before taking it as medicine (Turmer 1979). The Nihithawak (Cree) apparently used fresh usnea in the nostrils to stop nose bleeds and as a wound dressing to absorb blood (Leighton 1985). The diitiid7aa7tx (Nitinaht or Ditidaht) reportedly used U. longissima as a wound dressing to absorb blood, to absorb menstrual blood, as a diaper stuffing, and for cleaning fish (Turner, et al. 1983). The Nuxalk (Bella Coola) used usnea to make false whiskers on dance masks (Turner 1973). The Maori are also reported to have used U. barbata as a bandage to stop bleeding (Booker, et al. 1987). In the Simla Hills of India, U. longissima was reportedly used to stuff cushions (Chopra, et al. 1958). Jewish historical documents from the time they lived in Old Cairo (1,000 years ago) indicate the usnea was used to treat colds, cough, heart diseases, to improve eye sight, and as an anesthetic (Lev 2007; Lev and Amar 2006).
Back to Top

Botanical Description: Usneas are lichens, a symbiotic association between an algae and a fungus (lichenized Ascomycetes). The algae provides carbohydrates via photosynthesis while the fungus provides protection. Epiphytic species have thalli that are long, gray-green, and finely branched (considered fruticose or hair-like). Usnea has some of the narrowest diameter fronds of any related lichens. They have an inner cord that is white or yellow-white which can be observed by pulling away or peeling off the outer layers (from fresh or rehydrated material, once dry this becomes nearly impossible to observe), unlike any other lichen in the Pacific Northwest at least. There is extreme variability with this and all usnea species, including within one region (leading to the term ecophenotypes). Reproduction is by fungal spores (sexual) which does not involve the algae, or asexually which involves both partners. Small organs variously termed isidia or soredia often break off, containing both fungus and algae, for spread of the joint organism. Production of apothecia has not been observed, at least in North America.

Various reports suggest this lichen can reach up to 10 m in length. Generally the long thallus has a moderately thick central branch and many perpendicular short, roughly equal length side branches, giving a bottle-brush appearance.

Genetic testing has shown that there are at least four broad subgenera in the Usnea genus: Eumitria, Dolichousnea, Neuropogon, and Usnea (Truong, et al. 2013). Additionally this research showed that phylogeny was a good basis for determining species, matching closely with genetic research which confirmed most species as presently defined. This line of research is followed in this monograph, and Usnea is thus not reassigned to the genus Dolichousnea​.

Native range: This lichen is generally found in old-growth forests in a circumboreal distribution. In North America, it is most common across the boreal forests of Canada, in WA, OR, CA, NV, ID, MT, and across the upper Midwest into New England. Habitat loss from rampant removal of old-growth forests in all these areas has greatly and negatively impacted old man's beard. 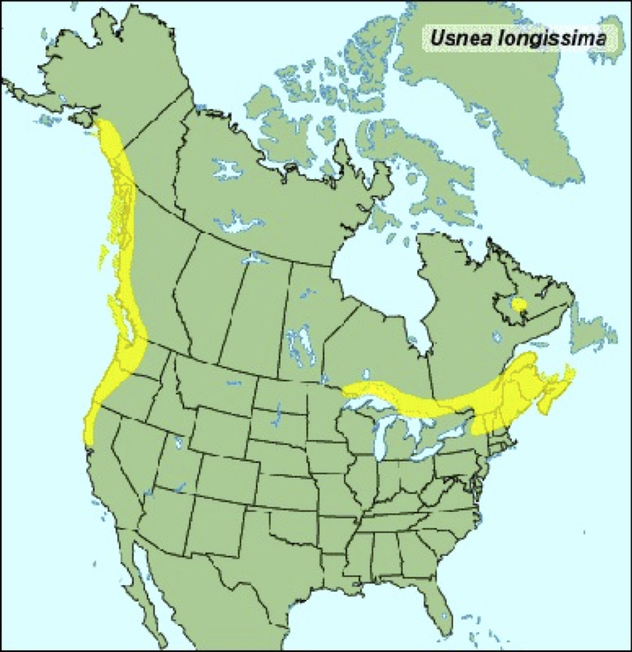 Principal distribution of Usnea longissima in North America.
Back to Top

Cultivation: This is not known to be practiced.

Wildcrafting: All materials are wild harvested at this point. Generally only specimens that have fallen to the ground naturally should be harvested, especially after storms. Areas of forest with only limited amounts of usnea should not be harvested, and material that has fallen to the ground should be restored to the trees. Areas with small populations reflect that they are second-growth, unhealthy forests, or may have been exposed to high levels of air pollution. This could make for toxic levels of heavy metals or other compounds in any surviving usnea. However, one analysis near a steel mill in Turkey found that U. hirta had low tendency to accumulate heavy metals (Cansaran-Duman 2011).

Ecological Status: Usneas are highly sensitive to air pollution, particularly sulfur dioxide (Nash and Gries 1991; Nash and Wirth 1988). They have been used to monitor air quality. As air pollution is reduced, usnea can re-enter areas from which they were previously extirpated (Showman 1997). Habitat has also been reduced by clear cutting old-growth forests. Particularly hard hit have been the northern and eastern European populations of usnea. Pacific Northwest usneas are considered relatively well off, though outside of national parks and protected areas they have been much reduced.
Back to Top

Dioscorides (2000) De Materia Medica. Being an Herbal With Many Other Medicinal Materials (translated by Osbaldeston T and Wood RPA. Johannesburg, South Africa: Ibdis).

Lev E (2007) "Drugs held and sold by pharmacists of the Jewish community of medieval (11–14th centuries) Cairo according to lists of materia medica found at the Taylor-Schechter Genizah collection, Cambridge" J Ethnopharmacol 110:275–93.

Lev E, Amar Z (2006) "Reconstruction of the inventory of materia medica used by members of the Jewish community of medieval Cairo according to prescription found in the Taylor-Schechter Genizah collection, Cambridge" J Ethnopharmacol 108:428–44.

Truong C, Divakar PK, Yahr R, et al. (2013) "Testing the use of ITS rDNA and protein-coding genes in the generic and species delimitation of the lichen genus Usnea (Parmeliaceae, Ascomycota)" Mol Phylogenet Evol 68(2):357–72.